Architecting for the .NET Platform and Deep Diving into the new CRUD

Posted by despos on September 19, 2016
Posted in: Software design, Training. Leave a comment

Whatever CRUD means to you, architecturally speaking it is now dead. CRUD is dead? Long live CRUD, then. A more abstract approach to software design and development, summarized by the CQRS/ES acronym, has been around for a quite some time now. Many have coded it already and shared their experience and each did it in a kind of unique and personal way. It’s about time, however, we standardize to a few reusable patterns.

Three days of SDD Deep Dive are enough to see a few of these CQRS/ES patterns in action within a new framework in development that aims at bringing the same smooth and familiar sense of programming of old CRUD to the next step. Join me then and I promise that in three days you’ll take a tour of the “known” (requirements, estimates, domain analysis, modeling, coding) and how it needs to change in order to remain mainstream and largely used.

ASP.NET Core, John McEnroe and the Mirror of my Office

At Wimbledon 1981, during his first round match against Tom Gullikson, John McEnroe had a chance to pronounce those (in)famous words: “You cannot be serious, man”. As a long-time tennis fan, those words remained printed in my mind. More than the wording itself, though, I remember the tone of speaking—blunt speaking.

I didn’t spend much time on ASP.NET vNext until it was really close to RC. To be honest, at this time moving away from battle-tested and mature ASP.NET MVC 5 is neither crucial nor critical for my everyday real-world development business. But, of course, any new thing is crucial and critical for a “guru” who gets exposure and gigs out of experimenting and speaking about new things. Imagine then when such a huge new thing like ASP.NET vNext comes out.

Anyway, I took it very lightheartedly until the final beta and then RC1. And when I looked at it—and the documentation—in front of the mirror, locked in the toilet of my office, me and me alone, I recalled those (in)famous that John McEnroe pronounced on the Centre Court of Wimbledon in the spring of 1981.

You cannot be serious, man.

I didn’t tell this anybody. I took it as my knee-jerk reaction to something that—no matter the announced stage (RC === release candidate) –I felt to be a great piece of work. Just in progress, though.

“It’s you, Dino—I said—YOU cannot be serious if you think so.”

But then it came the rename of tools, the rename of the entire framework, the RC2 announced and postponed. And you probably know the ongoing facts much better than me.

As I see things, ASP.NET Core was born to be a smaller thing than it is envisioned now. So it is now being repositioned, probably redesigned in some way and put in some sort of a different perspective. In the end, it will probably be the great piece of software it was supposed to be. But—as it was said at some point—it will take the time it takes.

This is a great lesson for anybody in software. Certain things must take their time to become serious things.

My wife and the MS/Xamarin deal

Posted by despos on February 25, 2016
Posted in: Brainstorming, Uncategorized. Leave a comment

I’m inclined to say that the author of this article on Fortune.com speaks with my own words on the Microsoft/Xamarin deal. Yesterday, like everybody else in the software industry, I got to know that Microsoft bought Xamarin. Really? OMG, we’re still there? I thought it was a closed deal since at least two years. My sentiment? In a sense, I don’t care. In another sense I do care and I feel comfortable.

Recently, my wife asked me a similar question, one of those women’s periodical questions like “Honey, do you still love me?” Believe it or not, my reply was along the lines of “In a sense, I don’t know and I don’t care” — well, it was actually just a tiny bit softer than this :).

Kind of shocked, but not too much, she replied “And in another sense?” (Well, Silvia has really a strong sense of humour.)

Well, in another sense I just feel more than comfortable and happy with you even after so many years of living together. So naturally comfortable and in a good mood that I don’t even realize I’m happy. It’s happiness by nature. Or, in software terms, by design.

Question is, Xamarin products are going to be integrated in the MSDN subscription now? 🙂

Ubiquitous Language Is Everywhere, Even in Your Nose

Posted by despos on January 16, 2015
Posted in: Brainstorming, Software design. Leave a comment

When it comes to designing software, the first step is getting familiar with the domain. The second step is modeling the domain into a more and more formal set of statements up to diagrams and code. To model the domain, Eric Evans suggested the use of something he called the “ubiquitous language”. In spite of the evocative name, it’s something as simple as a glossary of terms including verbs, names, adjectives, adverbs, form the pillars of a language being used in all written and spoken communications between all parties involved in the software project. The primary goal of the ubiquitous language is avoiding misunderstandings and assumptions on both ends—stakeholders and development teams. Put another way, the ubiquitous language aims at making any use of a given word or expression within the project absolutely crystal-clear and unambiguous. When that word or expression is used, therefore, there should be all around the absolute certainty that it was understood and in the right and expected way.

And now let me share a personal note to emphasize the vital role that a ubiquitous language plays in life and subsequently in software.

My wife had nose surgery a couple of months ago. In particular she had turbinectomy, namely the surgical reduction of her quite enlarged turbinate. When we discussed pros and cons, the doctor (aka, the development team) said clearly that it was a routine surgery with the hardest part of it coming in the following weeks once the patient had been sent back home. To illustrate possible complications, the doctor used the expression “nasal crusting” to be removed in a clinic or any sort of doctor’s office, in case of trouble. He also said that sometimes patients do so well that they never show up to remove nasal crusting.

We confused the term “crust” and“scab” and that was reasonable too as both usually happen when you have nose surgery. Now, crust refers to a mix of dried mucus, blood and dead tissue that altogether form a solid block as big as a small finger. A piece of crust is stuck inside the nose with barely any chance to get rid of it without a doctor. Scab is simpler matter as it’s a superficial cover on a wound of any type. You have scabs in the nose whenever you get significantly cold for example.

To make things worse, in Italian we use the same word for both crust and scab. To cut a long story short, my wife enjoyed two weeks of trouble until we called the doctor and he promptly removed the crust and explained us that crust is not the same as scab.

How many times did that happen to you software-wise? That’s just the ubiquitous language in action.

Dear Fellow CTO, I Write to You about vNEXT

Posted by despos on September 23, 2014
Posted in: Brainstorming, Software design. Leave a comment 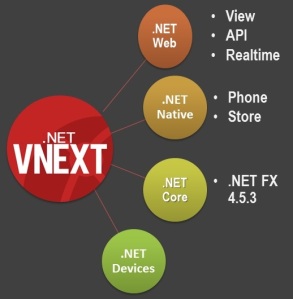 I doubt many CTOs go to technical developer’s conference where they can witness cool demos like a vNEXT web site deployed to a memory stick and installed on the clean machine of an unaware attendee. Such a demo is definitely cool and just the kind of thing done to excite developers. But I’m afraid it won’t appeal CTOs as much.

The Microsoft stack started an evolutionary, and perhaps just spontaneous, change around 2005–right after the release of .NET 2. The trigger was probably the advent (or just the rediscovery) of Ajax. Fact is, that the foundation of Web Forms–keep me off HTML and JavaScript–was shaken and challenged as people started asking for completely different features–just ability to effectively use HTML+CSS+JS in Web pages. Then it came ASP.NET MVC, Web API, SignalR.  vNEXT attempts at doing a bit of due housekeeping.

As a result, there are two options ahead for a CTO to consider.

1) Ignore vNEXT entirely and do business as usual: same frameworks, same coding experience, same deployment options, no additional features. You don’t lose anything of what you have and can do today;

2) Embrace vNEXT entirely as if it really were (and it is not) a breaking platform with no backward compatibility;

vNEXT lays the ground for Microsoft.NEXT. It inherits enough from current, adds some breaking changes, sets new goals and direction. Like it or not, you won’t be able to ignore vNEXT for too long. vNEXT is where the business of software  seems going these days. I invite you to consider vNEXT as a completely new family of products and frameworks regardless of framework versioning and actual compatibility. Code is–to a good extent–backward compatible; the approach to development is not.

Imagine the .NET vNEXT as a family of frameworks to base future development on. I’d even hope that names (ie, ASP.NET) are completely changed to smooth the transition and give the right perspective of what’s going on.

It goes without saying that this is the way I see it and would explain it to fellow CTOs and architects. I didn’t mention the cloud.  The cloud is the substrate of everything around vNEXT. You can have the cloud or not; whatever you can do in vNEXT can be done through the cloud too.